Will the Los Angeles Rams and the Cincinnati Bengals repeat their Super Bowl matchup in 2023? That’s the question pairLab endeavored to ask football fans in its second annual public expairiment predicting the NFC and AFC champions.

We’ll get to the fan predictions and compare them with the experts and odds makers in a moment. But first the methodology …

I conducted two pairLab expairiments, one for each football conference (AFC and NFC) from September 2 through September 8. Each was seeded with teams from their respective conferences.

The NFL scheduling formula pits divisional opponents against each other twice in a season and allocates remaining games among opponents in and out of their conferences. This pairLab expairiment instead focused on fantasy matchups, asking survey participants:

The combination of these two questions yields results that tell us how much football fans feel one team’s likelihood of winning is for a given matchup.

pairLab crowdsources ideas by inviting participants to offer suggestions that are fed back into the survey to be voted on by subsequent participants. In this case, the number of teams is finite and so idea suggestions did not apply.

The survey was posted to Facebook to attract survey participants. The posts targeted:

In all, 71 participants provided data within acceptable parameters and voted on 3,039 theoretical game matchups across the two conferences (by contrast, the NFL plays 272 games in the regular season).

Survey participants predicted the Bills and the Rams will make it to Super Bowl LVII. This potential championship matchup will be played in the season's opening game on September 8.

The Los Angels Rams are the defending Super Bowl champions. In last year's pairLab Super Bowl survey, fans ranked the Los Angeles Rams in fourth place while oddsmakers had them between second and fourth place.

As for this year's AFC champ, fans said the Bills are 1.3 times more likely to end up in first place over the Bengals.

Here’s how the survey participants rank the AFC: 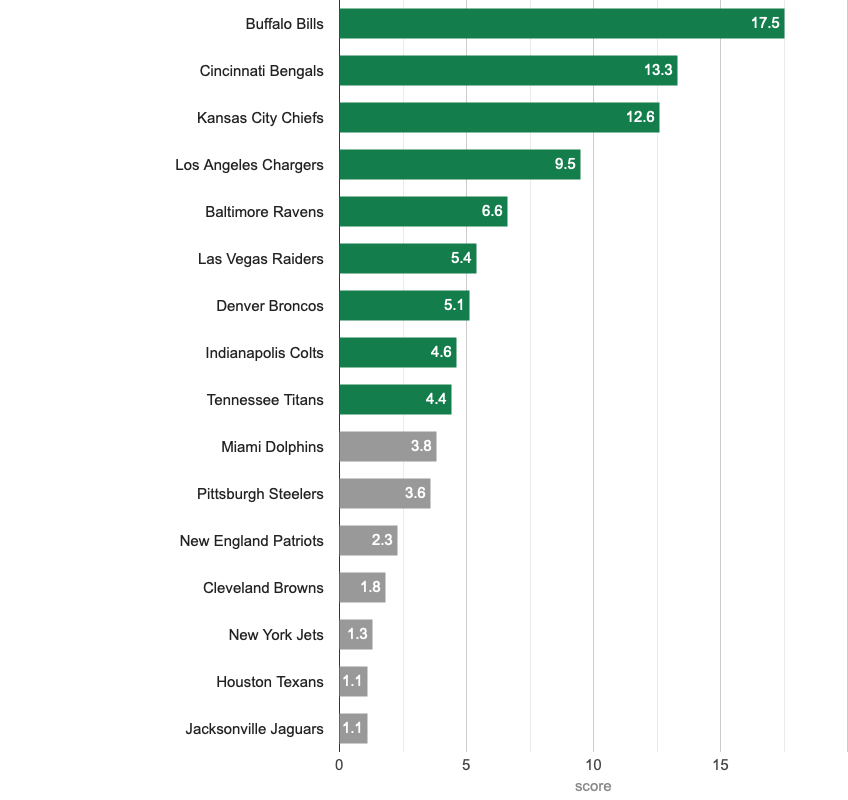 Fan prediction for the final American Football Conference standings in the 2022-23 season.

And here are the NFC predictions: 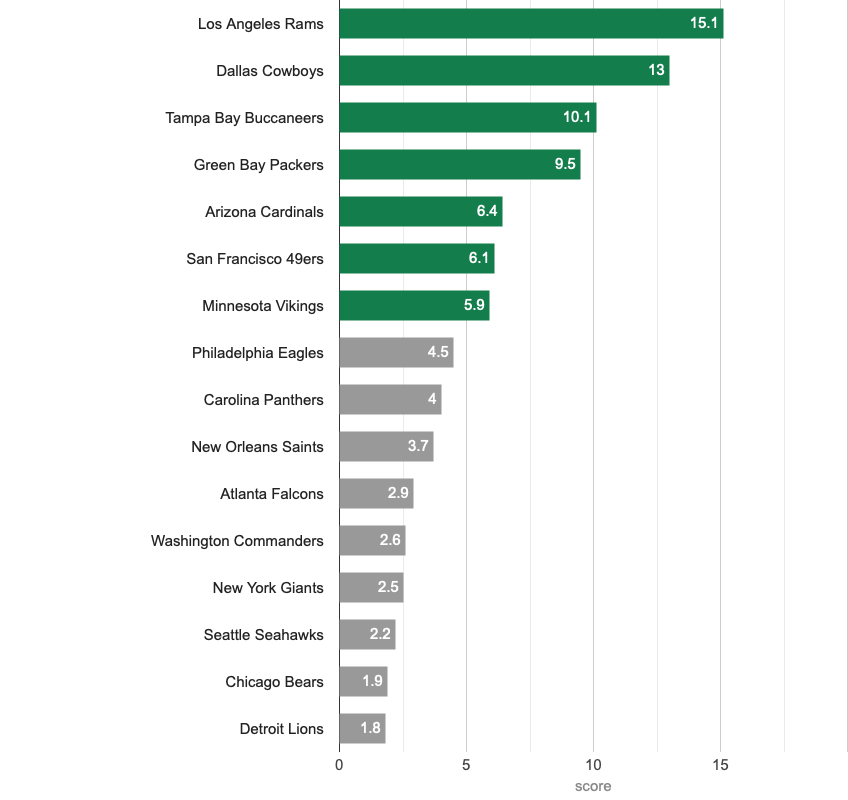 Fan prediction for the final National Football Conference standings in the 2022-23 season.

How to read these charts: pairLab shows rankings in two dimensions. The first is an ordinal ranking (“survey participants feel the Arizona Cardinals would rank in fifth place if each team in the NFC played each other this year”). The second dimension reflects likelihood and is expressed as a “pair score” (the number assigned to each team). A pair score is a comparable unitless measure that shows the relative ranking between two teams. For example, the Los Angeles Rams were ranked first with a pair score of 15.1. Comparing them to the second-place ranked Dallas Cowboys, which had a score of 13.0, we can say survey participants feel the Rams are 1.2 times more likely to end up in first place over the Cowboys this season (15.1 / 13.0 = 1.2). Green bars show rankings above the mean pair score for all teams, gray bars show rankings below the mean.

Comparing Fans to the Professionals

So, what do fans know? (Excuse me, fans know a lot.) It’s the expert sports writers who make a living (in part) by predicting the future. What did they have to say about the teams most likely to make it to Super Bowl LVII? Here's a sample (pairLab predictions in bold):

Only USA Today's Mike Jones agreed with fans in this year's survey.

pairLab Can Help You Predict the Future

Within reason. Actually, it’s an expert tool for finding your customers’ priorities to help you make informed product and marketing decisions. The results are stunning. Learn more and get the free trial.